Seachem Zeolite™ is a naturally occurring, highly-porous mineral that binds ammonia and heavy metals through an ion exchange mechanism. It has the highest ammonia binding capacity of any available zeolite; ten times higher than some products and twice the capacity of the closest competitor. It won’t deplete calcium in saltwater, and it won’t increase general hardness in freshwater, where the ionic strength is low.

For best results, Seachem Zeolite™ should be rinsed before use and placed so as to maximize the flow of water through it but not so that it tumbles against itself in flow. It may be used in a canister filter, media chamber, box filter, or any high flow area of a trickle filter. Use of a filter bag such as Seachem’s The Bag or Zip Bag is recommended.

Use 250 mL (1 cup) of Seachem Zeolite™ for every 200 L (50 US gallons). For smaller aquariums, the equivalent dose is 5 mL (1 level teaspoon) per 4 L (1 US gallon). This amount of Seachem Zeolite™ will remove up to 0.5 mg/L ammonia. Monitor ammonia levels, which should drop to zero within 24-48 hours. At this point, the zeolite can be removed or replaced with activated carbon, such as Seachem MatrixCarbon For heavy metals removal, leave in service and replace monthly. For long term ammonia control, use Seachem Sstabiltiy and Matrix. 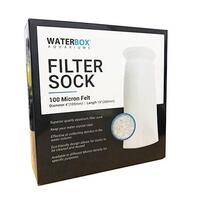