Spiny Marsh Snail (Thiara Amarula) is a freshwater species belonging to Thiaridae family. They are hardy and have beautiful shell-shape. They are native to Australia, India, Indonesia, Madagascar, Mauritius and Papua New Guinea. They grow approximately up to 5-6 cm and have a relatively long life. Colors of this snail are usually in shades of brown but blue and black colors are also common. It can be rarely found in trade. Thiara Amarula is an efficient algae eater and excellent candidate for aquariums.

The Spiny Marsh Snails burrows into sediment and gravel in cold freshwater streams just above the tidal influence. Hobbyist can find them amongst rocks and pebbles in their natural habitats. They eat detritus, excess algae and aerate aquarium substrate by scratching the gravel. Unlike other pest snails, it is easy to control its population in aquariums. Spiny Marsh Snail can be a perfect tank mate for non-aggressive fish, Neocaridina shrimp (cherries), Australian shrimp, Red Nose Shrimp and such species. They are less compatible with other Caridina genus shrimps like Red Crystal Shrimp, Bee Shrimp which prefers more acidic waters.

Since burrow regularly and turn the aquarium substrate they may be unsuitable for a heavily planted aquarium as they may cause some plants to unattached from the substrate. They are sensitive to bright light and burrow themselves into the substrate during the day time. Under lower to moderate lighting conditions, especially at night, they are active on the substrate and even climb the glass walls. They are suitable for brackish water aquariums with a low salt concentration.

The temperature of water must be between 16° to 25° Celsius. Spiny Marsh Snails prefer alkaline water with low to medium hardness and don’t need a lot of dissolved minerals like Calcium Carbonate. The shell dissolves in acidic conditions (pH < 6.0) and the snails do not come out.

Due the biology of Spiny Marsh Snails has not been studied thoroughly their breeding behaviors are not well known. As far as is known, they release free-swimming veliger larvae from the cephalic pouch and the larvae move into brackish water areas of the rivers before migrating back upper parts to settle. This requirement makes breeding in aquarium unlikely. Hence, their numbers will not bloom in freshwater aquariums.

Be The First To Review This Product! 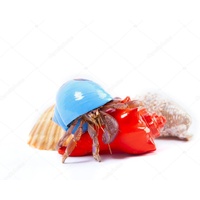